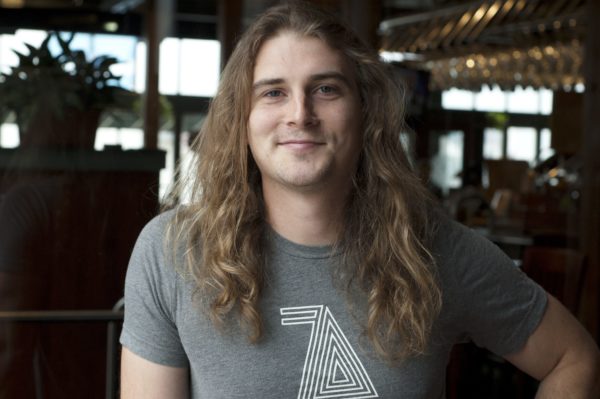 You’ve likely seen this gent around Springfield either enjoying a cold beer, or serving up some Brew Co. favorites at our events. Joey Ekstam is one of our newest additions to the team, and he joined the Brew Co. brewery squad as a brand ambassador earlier this summer. But ol’ Goldilocks is much more than your average craft beer fan. With a garage space that’s a little too small, and a beer fridge an inch too big, Joey’s enthusiasm for home brewing is just the right size. So sit yourself down and lean in for some one-on-one time with Joey.

How long have you been home brewing?

I have been brewing for about five years, but I have only taken it more seriously in the past year.  I used to brew with my friend’s father, but I was more of a helper and not an actual brewer.

Why did you decide to start home brewing?

I just wanted to make the beers I like to drink and make it more affordable.  Now it’s more about the learning process and the enjoyment.

What’s your brewery setup in the garage look like?

It’s a super-basic setup with a kettle, burner, etc. It’s a little too cramped to have a three tier system.

What was the first beer you made and how did it turn out?

The first beer I made on my own was a coffee porter.  I called it Billy Water, and it was terrible.

Which beer has been your favorite?

I really like making New England IPAs, and I think the beers I’ve brewed in that style really show how much I like them.

Which beers have been the hardest to perfect?

Most of my friends would say it was a imperial dark French saison I finished with hibiscus and oak chips. It tasted like cherry cough syrup. But I would say it was a raspberry berliner weisse that had some wild fermentation issues.

What unexpected problems have you run into with home brewing?

I’ve had a couple sanitation issues, but they were totally my fault.

What’s your favorite places to stock up on supplies for home brewing?

I normally go to Show Me Brewing. The guys there are great, and it’s super-close to my house. I also go the The Home Brewery in Ozark, they are great too. Either way, you won’t be disappointed.